The imported curd was lying one to three days in low barrels, where it was mixed with salt as necessary. Then it was either kneaded, foot treaded or milled on a mill to avoid its pellet-like shape.

The curd, not processed to the ripened tvaruzky within a few days, was stored in barrels or in concrete tanks. 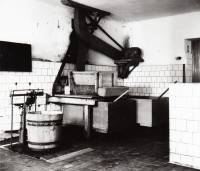 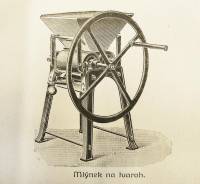 The main part of production of the ripened tvaruzky is started by its shaping. Flattening is the oldest technique – shape of the future tvaruzky was made by flattening a piece of curd between palms. At the beginning of the 20th century the tvaruzek was shaped by a wooden mould and mechanically - a quarter of century later. 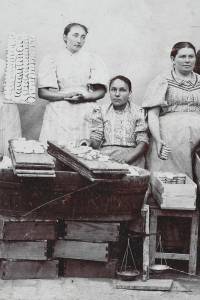 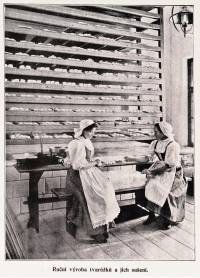 A hand mould for tvaruzky (in Czech “klapacka”, in some regions “luskacka”) and pliers The average daily performance: a very good “cheese shaper” produced 50 – 70 threescore per day and the best ones – up to 100 threescore – i.e. 6,000 tvaruzky pieces. There is a nice saying based on performance of these persons” .. you do not need any machine, you have … “ (and a name of a good cheese shaper) …. Performance of a cheese shaper having the hand mould went up to 150 threescore, i.e. 9,000 pieces. 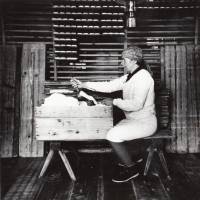 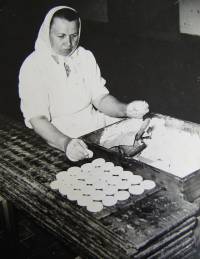 The first moulding machines modified for production of the tvaruzky were brought by Karl Pivný to Loštice from Germany and their domestic production (Francis Koegler, Loštice) began soon afterwards). 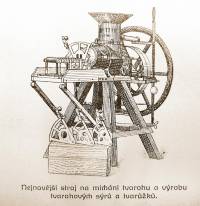 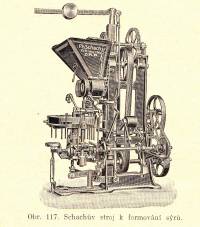 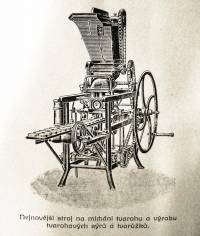 The curd cheese was sorted by size “from one up to seven”, even “nines” are known; we should also mention special shapes – hearts, rings (with a hole in the centre), rolls , or curd cheese pieces (in Haná region the so called “koski”), no worse in taste. 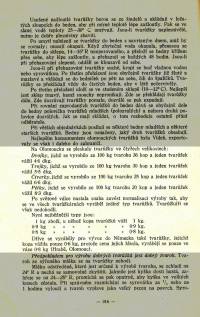 Classification of tvaruzky by size 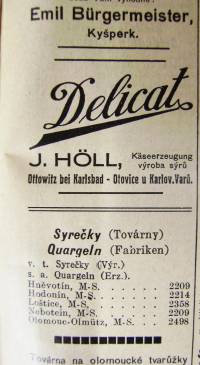 The shaped curd was stored on shingles - thin, planed boards, dimensions of ca 130 x 25 cm and about 1 cm thick. The shingles were inserted into simple stands, where they were turned during drying. The properly dried cheese was washed in salt water - in a washtub or trough. In case of mass production large washing machines with a rotating cylinder were used.

Sun drying in the yard 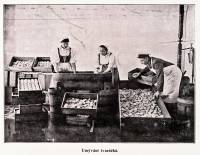 When washed, the cheese was thrown loosely into crates - boxes - and the boxes were cross stacked, but under different angles. Size of the left gap determined the rate of ripening. The top grates were relocated to the bottom and vice versa in order to reach uniform ripening. After the third relocation the curd cheese already had the characteristic yellowish colour. 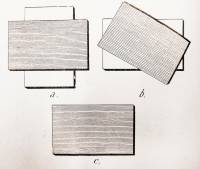 Production of the country tvaruzky fades away at the beginning of the 20th century, little is known about its production, but it is quite clear that minor tvaruzky makers (tradesmen) have emerged from it, and bigger and bigger producers afterwards …

After the last relocation the curd cheese was placed side by side to the horizontally oriented rollers and, later on, to vertical blocks. Manual stacking is applied even today … Originally, the curd cheese was placed freely in crates, then it was wrapped in wax or parchment paper. Cellophane was the first packaging from a wide variety of plastics. Oblong, low boxes are still used for transportation. 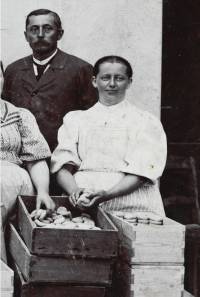 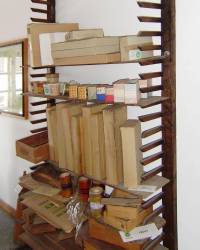 Crates made of wood and cardboard 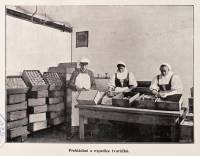 Packing and dispatch in Kroměříž

Carriers or carters became the first forwarders. Basket on the back was a universal helper for small producers. Distribution of curd cheese on a wheelbarrow was quite normal - even for tens of kilometres, but railroad became the greatest revolution in transportation. Small traders arrived the curd cheese factories on their bikes to take the goods away. For distribution to a wider area own or a rented horse team was used. An then the car has appeared …

Market in Prostějov with wicker baskets and wheelbarrows 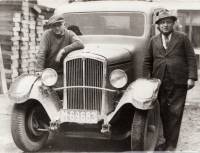 The reports concerning sale of the Olomouc cheese have been appearing from the second half of the 19th century, namely from both Americas through Europe up to the Caucasus and down to Turkey, but quantities of the exported Olomouc cheese are not known; on the contrary, it is absolutely clear certain that the Olomouc cheese enjoyed and still enjoys the greatest interest in the Central Europe.